Thanks to everyone who turned out for Saturdays tournament. We had a great turn out of players and now have 34 members battling for points.

Thanks to Hank Weiss and Paul Martin for prize donations.

Gross - Without HDCP :
Net - With HDCP :
Senior - With HDCP :
Congratulations to Lorenzo Forbes on his first trophy with the BAGA.

Here are the other awards :


Here are the Full Tables from Saturdays Tournament. Click on the tables to enlarge :

Here are the Full Yearly Tables. Click on tables to enlarge : 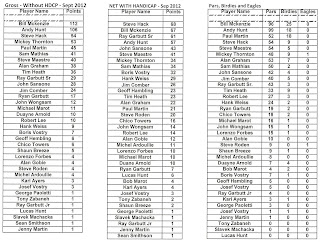 Posted by Administrator at 4:22 PM No comments:

Thanks to Korrie Williams for holding his Hearts of Christ Golf Tournament on Saturday Sept 1st 2012.

It was a beautiful day for golf and the players responded with some excellent scoring : 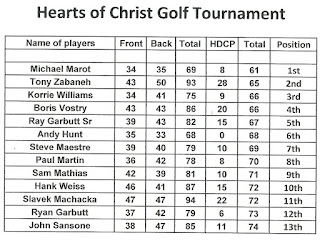 See you at our next tournament on September 15th.
Posted by Administrator at 7:57 AM No comments: